The Treasury Department on Thursday sanctioned pro-Russian Ukrainian lawmaker Andriy Derkach over his alleged attempts to interfere with the 2020 presidential election. The post Giuliani associate sanctioned over foreign interference in 2020 election appeared first on OpenSecrets News. 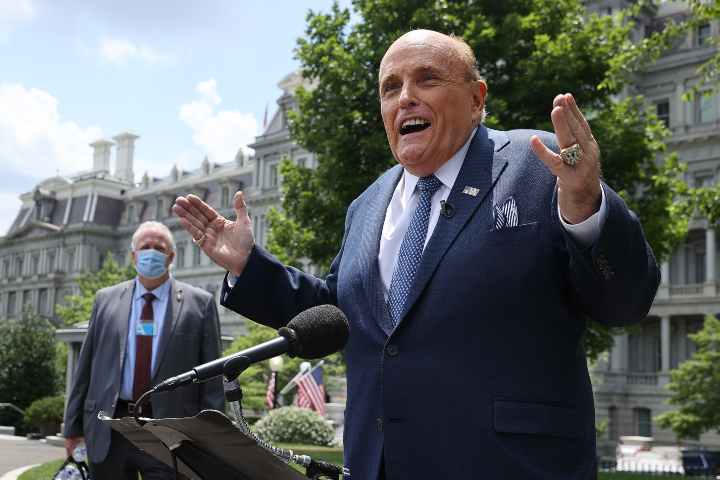 The Treasury Department on Thursday sanctioned pro-Russian Ukrainian lawmaker Andriy Derkach over his alleged attempts to interfere with the 2020 presidential election by planting misleading accusations of corruption against Democratic nominee Joe Biden.

Derkach is linked to the Kremlin and is the son of a former KGB officer. He worked with President Donald Trump’s lawyer Rudy Giuliani to supply conservative news outlets with dirt on Biden and his son, Hunter. Derkach also sent information about the former vice president to Senate Republicans investigating the Bidens, prompting U.S. intelligence officials to warn lawmakers not to participate in foreign influence campaigns.

Trump has insisted that Russia is not trying to boost his campaign, but multiple Trump administration agencies have said the opposite. The Treasury Department on Thursday labeled Derkach “an active Russian agent for over a decade” and indicated that he “waged a covert influence campaign centered on cultivating false and unsubstantiated narratives” to influence the upcoming 2020 election. The Treasury’s designation will freeze Derkach’s assets in the U.S.

Derkach publicly released edited tapes portraying a false narrative of conversations between Biden and former Ukraine President Petro Poroshenko. As vice president, Biden threatened to withhold aid to Ukraine unless Poroshenko fired the nation’s top prosecutor whom Western nations criticized as being corrupt. Derkach also tried to spur “corruption investigations in both Ukraine and the United States designed to culminate prior to election day,” according to the Treasury Department.

Trump appeared to bring up Derkach’s tape earlier this week at a Labor Day press conference at the White House, telling the press corps, “he’s right on tape and you don’t want to cover it. You should be ashamed of yourselves.”

OpenSecrets’ Foreign Lobby Watch database sheds some light on Derkach’s foreign influence campaign. From February through July, Derkach contracted with a firm called Global Management Association Corp in an attempt to set up meetings with the White House and members of Congress.

Derkach met with Giuliani and claims they “discussed available information on international corruption and the need to investigate it in the United States.” Planned activities in Justice Department records filed in April included “meeting with US officials” but the foreign agents did not disclose making any U.S. government contacts for Derkach before the contract ended, according to his most recent FARA filing on Aug. 15.

The firm Derkach worked with, Global Management Association Corp., is little more than a rebranded shell company that served as a Russian-linked oil company’s foreign agent to buy Ukrainian polling data in 2019. Andrii Artemenko, an associate of Giuliani and business partner of Erik Prince who came under scrutiny during the Mueller probe, ran Global Management Association Corp using the name “Andy Victor Kuchma.”

Artemenko previously collaborated with Michael Cohen, Felix Sater and Michael Flynn to push for a plan to lift U.S. sanctions on Russia. Artemenko’s wife, Oksana Kuchma, who is listed as an officer on records for many of his companies, incorporated what appears to be a new company in Florida called K&D III LLC in 2019 but it has kept a low profile and its function is not yet clear. One of the officers on the new company is Sergey Knyazev, is the chairman of the Ukrainian National Police and who met with Trump in 2018.

House Democrats impeached Trump late last year over charges that he solicited foreign interference from Ukrainian officials to help his reelection bid. The Senate acquitted Trump on a near party line vote.

The World Food Programme: a three-year experiment that...

Yanis Varoufakis on Bloomberg: What to do about economic...

Why identity politics is killing the Left

Song of the Week: Deftones Make an Electric Return with...

Dietmar Hopp is the man at the centre of a controversy that is dominating German...

One person is arrested after bodies of four women and three men, 17 to 22, are found...

Sen. Kamala Harris took the fight to Vice-President Mike Pence right out of the...

Every Hayao Miyazaki Movie Including Spirited Away, Ranked

Hayao Miyazaki has 11 movies that he directed, every one of them great. But which...

This barbaric and destructive 'old normality’ imposed by the neoliberal establishment...

The humanitarian situation in Tigray, Ethiopia, remains “dire”, the Spokesperson...

Bogus booze has been infiltrating the market, so physicists found a way to test...

Irish animation studio Cartoon Saloon's latest film Wolfwalkers is up for an Oscar...

Omicron: Vaccine nationalism will only perpetuate the pandemic