The Vets Memorial Theater, Providence, RI.December 19, 2021. The Nutcracker, although younger than many story ballets, is quite a classic. Given its popularity and reach across the world, one might reasonably argue that it’s the ballet classic of ballet classics. COVID has forced many dance companies to reimagine what the holiday tradition could look like. […] The post Re-envisioning a tradition: Festival Ballet Providence’s ‘The Nutcracker’ appeared first on Dance Informa Magazine. 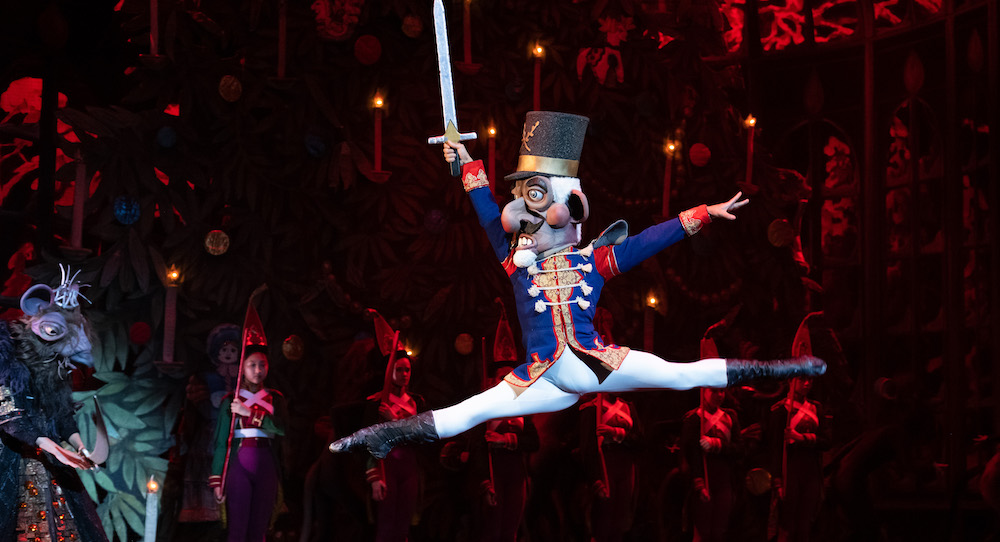 The Nutcracker, although younger than many story ballets, is quite a classic. Given its popularity and reach across the world, one might reasonably argue that it’s the ballet classic of ballet classics. COVID has forced many dance companies to reimagine what the holiday tradition could look like. Rising discourse around important social issues has also led many companies to think more deeply about how they can be part of propelling positive change.

Festival Ballet Providence, for its part, had to quickly shift to a filmed version in late 2020. This season, things were at a place with COVID (locally and at a broader scale) that the company could bring its Nutcracker back to the stage. Festival Ballet Providence, with Kathleen Breen Combes at the helm as director and Yury Yanowsky contributing choreography, took that return as an opportunity to boldly re-envision the aesthetic and atmosphere of the holiday ballet: to be more inclusive and unique, naturalistic while magical, modern while also honoring the Nutcracker’s storied history.

Furthermore, this new vision (which the company also called a “World Premiere”) offered just enough size and flash to create a “wow” factor without getting ostentatious or campy. Victorian in aesthetic but modern in atmosphere, it wonderfully brought together the classic and the contemporary. Combined with the opportunity to once again experience the Nutcracker in a big fancy theater once again, taking in this program brought the magic of the holiday back for me – and I bet I wasn’t alone in that in the audience that day.

The curtain rose, and the first thing we in the audience saw was a beautifully painted backdrop, of a winter wonderland just outside of a Victorian-style home rimmed by evergreens (Set Design by Peter Horne). Excited guests, with gifts in hand, moved swiftly towards the Silberhaus’s for a holiday party. That lovely winter wonderland backdrop rose to reveal a Silberhaus home that was just as exquisite, without anything being inauthentically “over the top”.

Beginning to build character, Clara (Charlotte Seymour) greeted her parents, polite and graceful. Meanwhile, her little brother Fritz (Cullen Gamache) played with a toy kite, evidently not concerned about breaking any of the holiday decorations. Other children soon joined, along with their parents. The boys were upstanding and gentlemanly and the girls sweetly elegant. These children appeared to be older than those in many Nutcracker productions – as with many productions this year, likely the result of COVID vaccination eligibility ages.

This production made the best of this by having these young people come off as genuine pre-teens or young teenagers, further building the naturalism that the production had already begun to build. Accentuating that quality, Harlequin (Katherine Bickford) and Columbine (Kailee Felix) appeared more like realistic life-size dolls than these characters do in many Nutcracker productions: their movements more human in quality than jerky or mechanical and their costumes more like period finery than toys’ costumes.

The adults dancing at the party, in their turn, were the height of ballroom elegance – bringing all the more authenticity. With Herr Drosselmeyer’s (Moisés Martín) antics at play, even the maid (Maria Rogler) joined in the dancing fun. Dancing Panda Bears would have their part in the merriment soon, as well (and, naturally, the younger attendees were entranced by such wild and exotic creatures). Keeping it all realistic, the Bears crawled away on all fours. Even with such slightly magical elements, it was all naturalistic enough that I felt like I was watching a scene from real life play out – granted, perhaps with a jester such as Drosselmeyer pulling magical strings!

Clara, for her part, offered lovely lines and child-like warmth. Seymour was a notably strong mover, in a way that embodied the passion and conviction of youth, but also welcomed in softness. At midnight, in the glow of her candle and the purple light bathing the space (Lighting Design by Brandon Stirling Baker), she saw the magic truly commence. Battle Scene brought further intriguing design choices, such as cavalry (soldiers wearing large costume horses, Costume Design and Concept by Judanna Lynn and Emerald City Theatrical) and the lighting turned to the blood-red of battle.

All of that tension melted away with the ethereal and magical Snow Scene, however. Little Snowflakes carried lights, more on the magical and less on the realistic side of things for this production (but either way delightful). Larger Snowflakes created entrancing patterns through the stage space, those that illustrated the uniformity but also points of individuality – such as with wind blowing some snow in different patterns in the air.

For example, long lines traversing from right to left stage felt like snow continuously coming down, yet occasionally a few in the ensemble would turn away in their own directions. That juxtaposition brought unpredictability yet also harmony to the stage. Kirsten Evans as the Snow Queen offered a quickness and a fire to her movement, like the bite of incoming snowflakes to one’s face, yet also with a fluidity reminiscent of snow’s easy, natural beauty.

All of this took place before another memorably lovely backdrop, of an evergreen and snow-filled winter wonderland brightly lit a full moon. Just as stunning, the costumes in blue and white, some parts sharp and some curved, contained all of the qualities of a snowy and icy landscape.

As the scene drew to a close, Clara and her Nutcracker Prince (Kobe Atwood Courtney) traveled off in a reindeer-drawn carriage as the Snowflakes, the Snow Queen and King (Alex Lantz) waved goodbye to them. That brought suspense for Act II; where were Clara and the Prince going, and what would they find there?

Act II brought us to the Land of the Sweets. We met the Sugar Plum Fairy (Nina Yoshida): soft, effervescent, and ethereal – just like an otherworldly creature like her would be! Residents of this land, who would all soon dance for Clara, joined and bowed to Sugar Plum. Drosselmeyer was back, as well, still pulling magical strings. Behind them all was yet another dazzling backdrop, of an expansive landscape of rolling hills and forests – which brought the sense that this was a whole world of its own, one with boundless possibilities.

Hot Chocolate was a pas de deux, danced by Katherine Bickford and Audrey Lukacz, offering opportunities to bring the flighted vibrancy of lifts. They used castanets, which added another rhythmic layer and infused further naturalism. Arabian Coffee built a compelling relationship between the two characters, danced by Tara McCally and David DuBois. McCally began veiled, but DuBois unveiled her – which, in conjunction with the serpentine and undulating movement to follow, offered something subtly sensual. Low lavender lighting infused something mysterious into all of that.

Aligned with the grand design in this production overall, Tea came with a Chinese New Year’s dancing dragon. The soloist, Kailee Felix, was fresh and lively through the quick jumps and turns of the variation. That choreography took some risks and fresh approaches, in fact, including some floorwork (not often seen in classical ballet!). French Marzipan was a pastoral painting, full of ease and brightness. One soloist began (Madeline Glinski), and then her sheep joined her! She hit accents well but also allowed it all to stay continuous, aligning with the musical layers in the score.

Mother Ginger (Joshua Tuason) slowly shuffled in, complete with a giant skirt, to kick off her variation with the Polichinelles. That giant skirt presumably allowed older children to hide in it and then pop out of it, given vaccine availability and subsequent age limits for cast eligibility (something that, from what I can tell, has led other Nutcracker programs this year to omit this variation). Moreover, it was another creative element that aligned with the ambitious, yet not quite over-the-top aesthetic sensibility of Festival Ballet Providence’s production.

Meeting the grandness of the design and further infusing childlike fun, Clara and Drosselmeyer joined in the Polichinelles’ dance. Two Polichinelles took a last moment for acrobatics before going back under Mother Ginger’s enormous skirt – common with this variation, but which nevertheless seems to never fail to delight! Russian Trepak offered its typical and impressive high-flying fun. An intriguing and quite original choice with this production was the Nutcracker Prince also dancing this variation.

Drosselmeyer, for his part, was clearly still orchestrating the magic; with a few waves of an arm he ushered in the Flowers. Their skirts were in a darker palette than is common with this variation – which was aligned with this production’s aesthetic, but also built the sense of a garden of maroon-red roses (or red poinsettias, more seasonally!). The ensemble brought the simple, natural elegance of roses to boot. As with the Snow Scene, symmetry and asymmetry came together to create a sense of nature’s complex, yet inherently wise and fruitful order.

Dew Drop (Anna Lisa Wilkins) moved in a pleasantly unhurried manner, letting the notes move through her in a legato quality (which, in truth, takes rock-solid technique and control to achieve). The Sugar Plum and her Cavalier (Mamuka Kikalishvili) then took the stage for the Coda, filling the grand stage with their fully invested virtuosity and artistry. Cavalier brought debonair ease to his strength, and Sugar Plum’s punctuated quality worked wonderfully with the spritely music-box quality of her coda solo.

Continuing to keep it all moving, Drosselmeyer waved in the residents of the Land of the Sweets (who had danced for Clara) to do one final dance and bid her farewell. The ensemble was wonderfully lively and rhythmically on-point, and it was lovely to experience them dancing in that way altogether – particularly after these many months of COVID.

After that long time, we in the audience could return to enjoy a bold and refreshing new Nutcracker, one of the 21rst century but which also kept the holiday tradition’s essence alive. The daring of innovation and the know-how of the tried and true – we’ll need both as we step forward from here. Let’s also be sure to experience the magic of live art, in and out of the holiday season, as we do!

Ashes: Bairstow and Stokes To Play As Batsmen in 5th and Final Test

Our December newsletter is out!

An inspiring and unique event for dance teachers: Dance...

John Kerry made the remark as the U.S. officially returned to the climate agreement...

Why Are Democrats Praying for the Speedy Recovery of a...

People typically rejoice over, not lament, the death of someone they genuinely believe...

Simon & Garfunkel’s “The Sound of Silence” Takes Us Inside...

The folk-rock duo's driving song unlocks one of cinema's great studies of ennui,...

On Thursday, Mike Pompeo became the first U.S. Secretary of State to visit an Israeli...

Texas Troopers Opened Fire From a Helicopter in 2012. Families...

A wholesome family gathering becomes a claustrophobic chamber piece in the hands...

Four men charged with rape and murder of 19-year-old Dalit woman, in case that outraged...

Researchers say the first coronavirus-related death in the country happened in January,...