Front Lines: Political Cartooning and the Battle for Free Speech The Editorial Cartoon Initiative and the Association of American Editorial Cartoonists 102 pages 2019 $15.00 After doing a review of Red Lines this summer, Politico cartoonist Matt Wuerker contacted us to see if we would be interested in doing another... 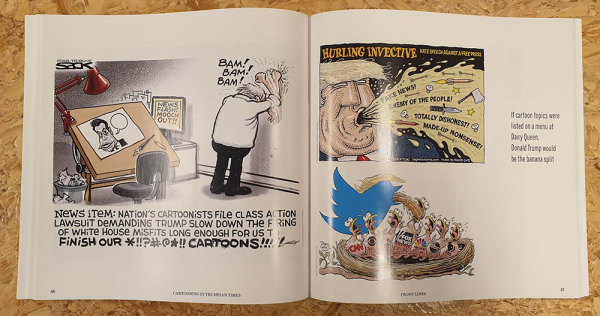 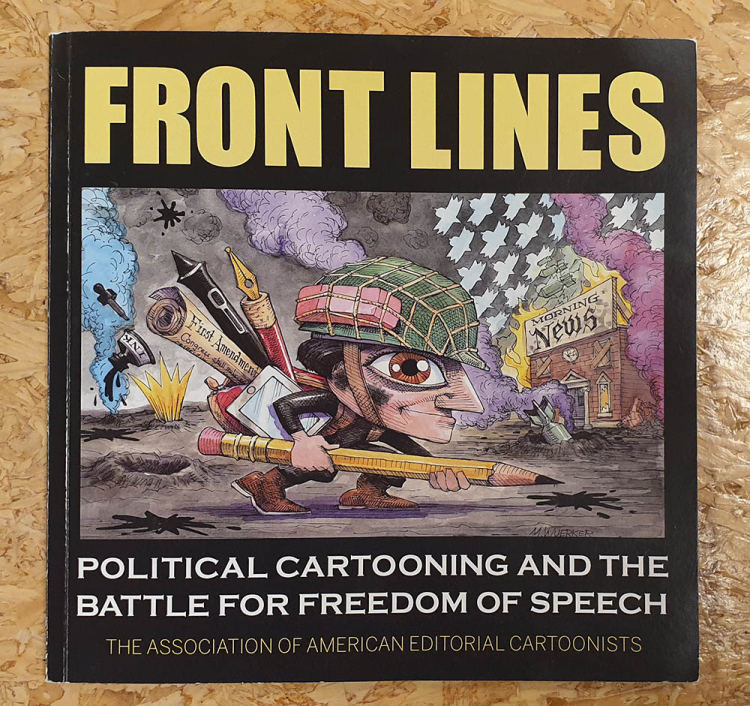 After doing a review of Red Lines this summer, Politico cartoonist Matt Wuerker contacted us to see if we would be interested in doing another book review. Wuerker is the editor of Front Lines, a book about (American) editorial cartoons and freedom of speech. It was published in 2019 by the Association of American Editorial Cartoonists (AAEC) and contains several essays by cartoon experts and by American cartoonists, including Matt Wuerker himself, Joel Pett, Rob Rogers and Ann Telnaes. Of course, the whole publication is liberally illustrated with many cartoons not only from AAEC members, but also historical cartoons from the 18th, 19th and early 20th century.

All the essays make the argument that cartoons are a vital part of democracy. In the first essay, Joel Pett laments the decision of the international New York Times to stop running political cartoons. In the wake of Charlie Hebdo, the profession of cartoonist seemed to be elevated, Pett argues, with thousands rallying to defend cartoonist and the right to free speech. But the NYT seems to feel differently (even though they shouted 'Je Suis Charlie' just as hard back in 2015), which is inexcusable in world that needs more cartoons, not less.

I found the second essay, by Lucy Shelton Caswell, to be very interesting, because it goes into the historical relationship between political satire and the First Amendment (which guarantees US citizens the right to free speech). The essay is illustrated by many historical samples, including the work of Thomas Nast (the godfather of American political cartooning) and Bill Mauldin (a soldier who drew cartoons from the front lines of World War II).
It also contains probably the most captivating quote from the book, from 1954:

'Only a generation or so ago almost every self-respecting daily newspaper had its own political cartoonist. Usually he was the highest paid member of the editorial staff, and his work was invariably displayed in the most prominent section of the front page. Today, few of these papers such cartoons at all and if they do the panels are likely to be hidden away in the back pages. Even when such offerings appear with any regularity, they are of the "canned" or syndicated variety.' 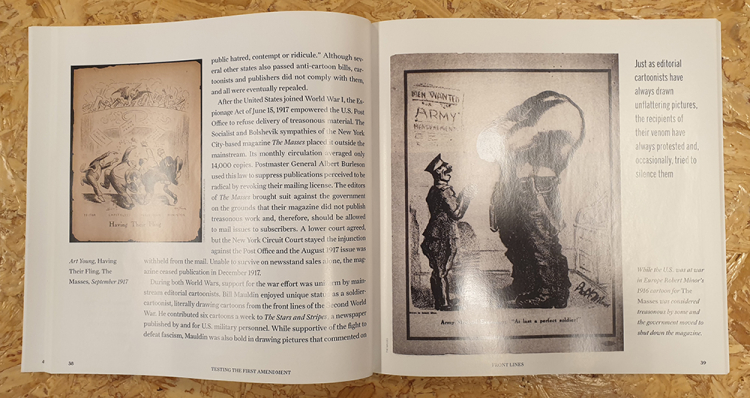 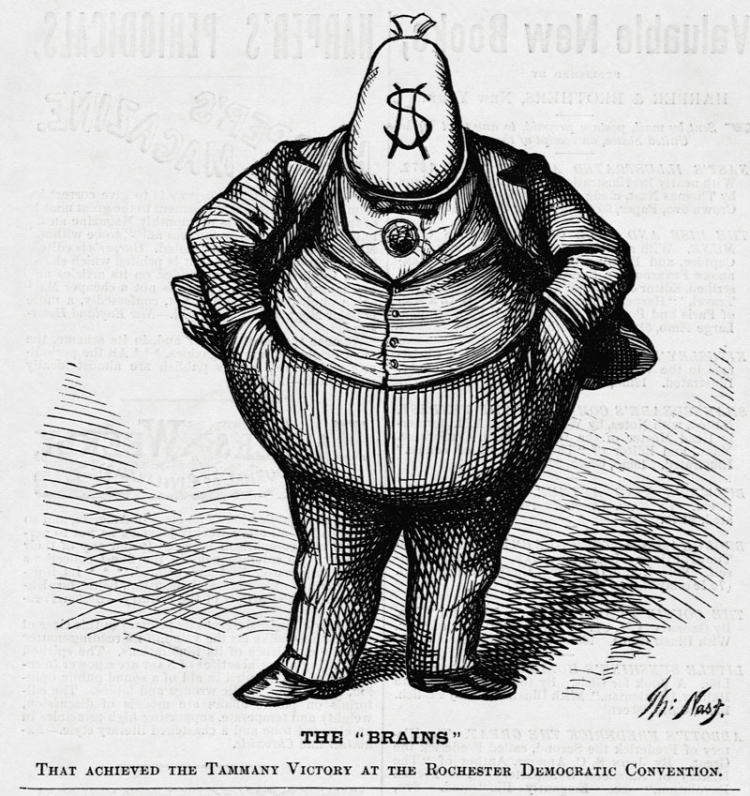 It seems that concerns about the future of political cartoons have been around for a long time. The good news: we're not dead yet. The bad: things have not improved since 1954.

Another really interesting essay is written by Roslyn A. Mazer, about a landmark court case, Hustler V. Falwell, that saved political cartooning in the US. In 1984, Jerry Falwell, an ultra-conservative religious leader, sues Hustler magazine over a satirical piece. The piece was a spoof ad for Campari, containing a fake interview about Falwell's first time (which in the piece includes an outhouse, his mother and a goat). 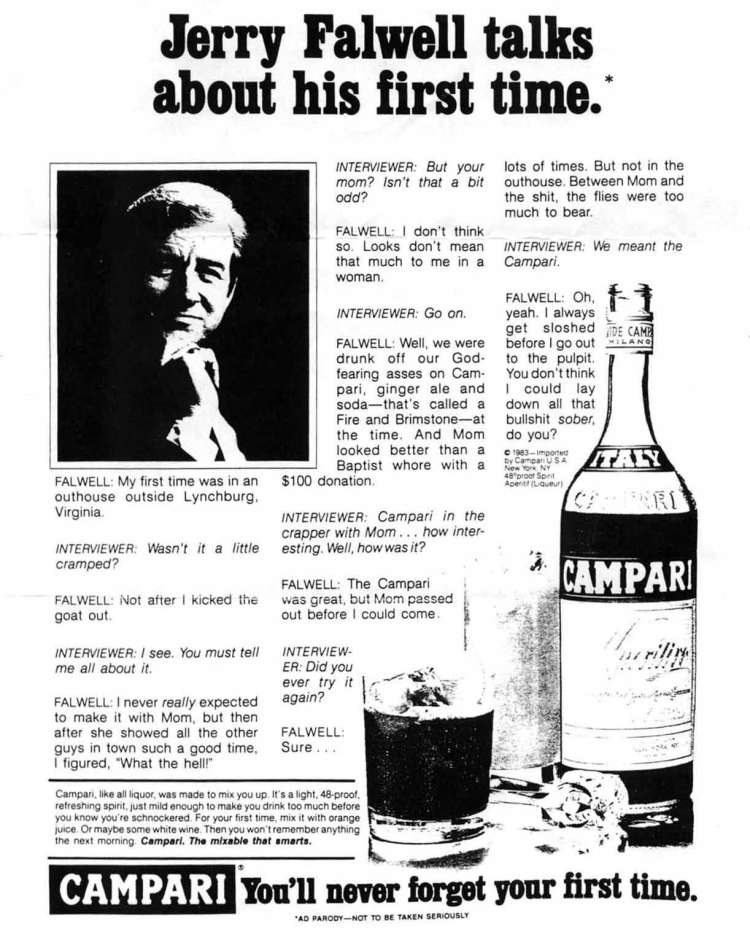 The parody ad published in Hustler.

Falwell was awarded $200,000 in damages for emotional distress by a lower court. The AAEC took the case to the Supreme Court, in the hope of getting it overturned. If this verdict was allowed to stand, it would mean all targets of satire could now sue cartoonists for causing emotional distress. The AAEC was set to fight an uphill battle, as the majority of judges serving on the Supreme Court were conservative at the time.

Surprisingly, they won the day. In his verdict, Chief Justice Rehnquist stated that 'The art of the cartoonist is often not reasoned or even-handed, but slashing and one-sided. [...] our political discourse would have been considerably poorer [with political cartoonists.]

Rob Rogers' contribution to the book is about drawing Trump. And although the orange menace is no longer in office, there is a good chance we haven't seen the last of him, so the topic is still very relevant. And it's an interesting read (with, again, a lot of cartoons), especially since it was written by the guy who was fired because of his Trump cartoons. 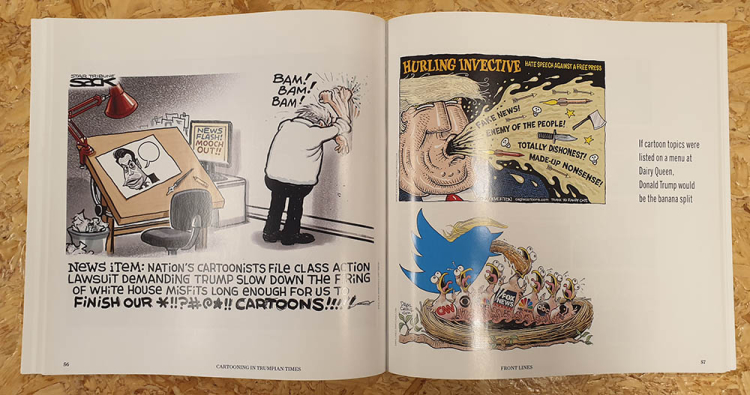 In the penultimate chapter, Wuerker muses about the future of the art form, now that staff jobs at newspapers seem further away than ever for most cartoonists. Will (professional) political cartoons survive beyond newsprint. Only time will tell. Wuerker does a good job in arguing why they should.

Ann Telnaes summarizes all the arguments in the book in the last chapter, which is a tribute to the cartoon in the form of a graphic narrative.

So, what's the verdict? Should you read this book? You should, if you are at all interested in US political cartoons. Although many of the points raised were familiar to me, I did enjoy the brush up on history of political satire in America.

The only thing I did not enjoy (most likely because I'm European) was the continuous emphasis on American exceptionalism when it comes to free speech. Yes, the First Amendment is great, but free speech is not a uniquely American invention or accomplishment. The last time I checked, there are numerous countries listed higher in the Press Freedom Index (the US is currently at number 44). And the First Amendment doesn't preclude the existence of red lines in US society. Try publishing a cartoon with any form of nudity in a US newspaper, or on (US owned) Facebook for that matter.

With that minor side note out of the way, I do recommend you check out the book. The US has one of the best traditions when it comes to political cartooning, and I am still frequently in awe of the skill and wit of US cartoonists. The book should still be available at the AAEC (you can email them at editorialcartoonists@gmail.com) and with the $15 you will be supporting their work, making sure political satire stays alive and well in the USA.

Ethiopia's army says it has seized control of several towns in the northern region...

Prosecutors probe the provenance of the artefact, bought by crafts retailer Hobby...

Police and prosecutors rule out racism, but activists ask if hate crimes are being...

Venezuela and Iran Strengthen Ties Against US Sanctions

The Latin American and Persian nations have been targeted by Washington’s illegal...

Harmonix's New Game, Fuser, Gives Everyone the Chance to...

If being a DJ performing in front of a crowd of thousands has always seemed like...

Cinnamon, nutmeg, and ginger complement the carrot in these hearty, satisfying vegan...